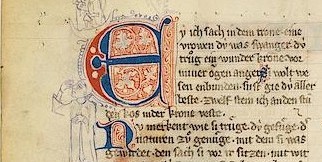 Undergraduate student Walker Horsfall was awarded a University of Toronto Excellence Award (UTEA) for his research project “Invoking Sacred Spaces: Heinrich von Meissen and Medieval German Religious Poetry.” Congratulations! Only 13 undergraduate students in the Humanities and Social Sciences in the whole University are among the UTEA holders for 2014. Walker will hold the award under the supervision of Prof. Markus Stock at the Department of Germanic Languages and Literatures from 5 May 2014 to 23 August 2014. This is the second UTEA at the Department of Germanic Languages and Literatures in the past two years, underscoring the Department’s commitment to outstanding undergraduate research.