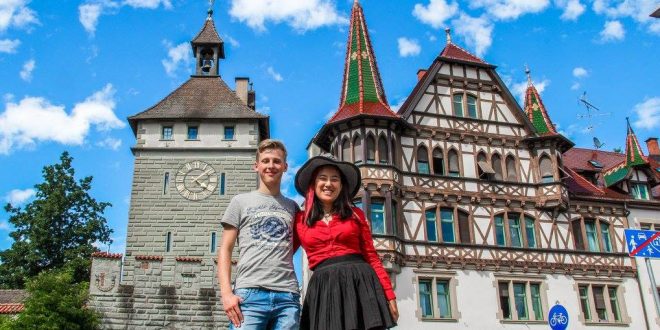 Where are they now? – Profiling Angela Zhu

Our twelfth article profiles the career of Angela Zhu.

Welcome to this edition of ‘Where are they now’? In this article, we profile Angela Zhu – UofT 2014. I hope you find this article interesting and maybe even inspirational.

Angela Zhu graduated from the University of Toronto (Victoria College) in June 2014.  Her double majors were International Relations and Conflict & Justice; her minor was German.  After graduating, she worked on a contract basis for two years for political, trade union organizations, and charitable groups.  She decided to go back to school as a full-time student in 2016 to realize her life-long goal of becoming a lawyer, studying in the Faculty of Law at the University of Windsor.  We caught up with her in Toronto, having just returned from a 3-month study trip to Malaysia.  She was ‘on the go’ and preparing to commence her second year of legal studies.

Studying another language was a requirement for taking International Relations.  I chose both German and French, and I developed such a fondness for German that I decided to continue it as a minor.

I am now a full-time student.  In my previous contract positions, I handled media and public relations which included TV appearances.  I also wrote press releases, prepared materials for press conferences, and liaised with different groups who interacted with these organizations.

While I enjoyed my contract work, I had always wanted to become a lawyer.  The focus of my studies is around employment and labour law, human rights and consumer privacy matters.  I plan to work in Ontario.  My undergraduate studies were a natural lead-in to my law studies.

In my contract positions, I attended a lot of meetings, prepared written papers and briefings, and liaised with many groups.  I worked on political campaigns as a party organizer, and handled public rallies and media appearances.  I wrote speeches, prepared candidates for debates, did data analysis, and prepared materials for dissemination to the public, sometimes in languages other than English.  My ability to speak four languages (Mandarin, English, French, and German) was put to great use in this job.

I enjoyed working with the different people and organizations and networking with politicians and union representatives.  I got to see what life really looked like ‘behind the curtain’ presented to the public.  I am sure that I will be able to use these contacts in my future career.

I did not have a Master’s degree in Public Relations or any formal training in this area, so I was faced with a steep learning curve.  Luckily, I had great employers who were willing to help me learn.  I also liked the fact that there was always something new to learn in the role and the opportunity to improve at the task the second time.

In my communications roles, I found that many of the tasks came easily to me, as I tend to be quite personable and have been told I’m a good communicator. People find it easy to talk to me – thus allowing me to create and maintain positive relationships, especially with our clients’ contacts.

In terms of my goal of becoming a lawyer, I am passionate about righting injustice and fighting for people or groups whose rights have been infringed upon.  I do not back down on issues that matter.   It is essential as a lawyer to be able to stick with a case even if it can take years to resolve.

Being able to communicate in multiple languages has equipped me with the ability to go beyond what I want to communicate, to also focus on how to communicate the message so that I choose vocabulary and grammar that is accessible and effective to those from other language backgrounds.  I am able to see issues from many different angles, which includes that of culture, and that has made me a more effective communicator.

Studying German also provided me with an opportunity to spend 3 months in Germany.  In Germany, I met many different people there from different walks of life who were eager to share their culture with me.  I got a better understanding of the many different cultures and histories that make up German society, which has stayed with me to this day.

I would like to work in a law firm, specializing in employment and labour law for the first few years after graduation.  With my interest in international relations and justice, I might also consider working in the public sector.  The contacts I made in my contract positions could also yield some interesting career opportunities, including the possibility of becoming involved in political action groups or in developing public policy.

I like photography, swimming, hiking, and travelling.  I just returned from a trip to Malaysia where I studied constitutional law and privacy law.  In particular, I fell in love with the island of Borneo.

Make friends with people who speak German.  You will find that they can create a network of people interested in helping you advance your career.  Find a way to study and/or work in Germany so you can move beyond the language to learn about the culture and history.  One way of doing this is to ask your professors about scholarships.  There are many available that allow you to study and work in Germany, and other countries whose language you are studying.  I would not have had the many opportunities to travel and study abroad if it were not for the availability of scholarships.