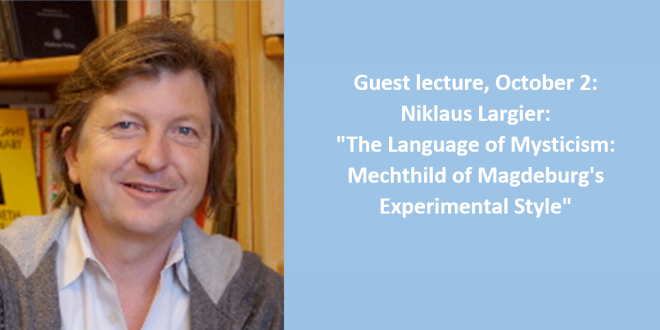 October 2, 2014, 16:00
“The Language of Mysticism: Mechthild of Magdeburg’s Experimental Style”

Niklaus Largier, Sidney and Margaret Ancker Chair in the Humanities, is Professor of German and Comparative Literature. He is affiliated with UC Berkeley’s Programs in Medieval Studies and Religious Studies, the Designated Emphasis in Critical Theory, the Designated Emphasis in Renaissance and Early Modern Studies, and the Berkeley Center for New Media. His research deals with German literature and philosophy, especially questions of the relations among literature, philosophy, theology, the history of fantasy and the emotions from the Middle Ages to the Baroque era; the history of the senses, of sense experience, and of the stimulation of the senses-especially taste and touch-in medieval, early modern, and modern cultures. Niklaus Largier is an expert on mystical traditions in German literature and thought, in particular Meister Eckhart and his influence from the Middle Ages to postmodern discourses. His most recent books explore the relation between bodily ascetic practices (in particular flagellation), eroticism, and the literary imagination (In Praise of the Whip: A Cultural History of Arousal, 2007) as well as the fascination of decadent literature with such religious practices (Die Kunst des Begehrens: Dekadenz, Sinnlichkeit und Askese (2007). His books include a study on time and temporality in late medieval philosophy and literature (1989), a bibliography of literature on Meister Eckhart (1989), a two-volume edition of Meister Eckhart’s works with extensive commentaries in the Deutscher Klassiker Verlag (1993), and a study of the significance of exemplum and exemplarity in medieval literature, philosophy, and historiography (1997).

We gratefully acknowledge the support from the Centre for Medieval Studies and the Pontifical Institute of Mediaeval Studies.

If you have any accommodation needs, please e-mail german@chass.utoronto.ca five business days prior to the event, and we will do our best to assist you.