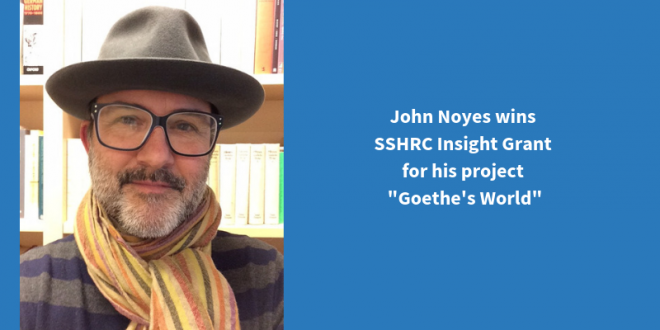 “The proposed research builds on my ongoing work investigating the way German intellectuals of the crisis years from 1750 to 1850 responded to the emergence of cultural, political and economic modernity with its increasing focus on globalization. My work on Herder revealed just how important anti-imperialism and the new awareness of globalization were for this seminal phase in German culture. In my book on Herder I had to sideline the importance of Goethe’s literary and scientific explorations of globalization, though his work was connected in important ways to that of Herder. The proposed research will continue where that project left off.  It will take as its object Goethe’s ongoing attempts to develop scientific theories and literary forms appropriate to his holistic understanding of the world. My guiding hypothesis is that a dialogue is necessary between Goethe’s holistic conception of the world and more recent attempts to think of the world in similar terms.

Goethe’s understanding of globalization and of “world” relies on a set of representational strategies aimed at bridging the divide between scientific and literary representation. The concept of “world” encapsulates Goethe’s struggle for an adequate understanding of how individuals relate to their environment – where environment is taken in the cultural, ecological and political senses. The representational tensions inherent in his concept of “world” remain of vital importance in the context of today’s globalized world. I see this project as part of the ongoing attempts of scholars to restore interdisciplinary and humanities studies in the face of the legitimacy crisis in the hard sciences.”