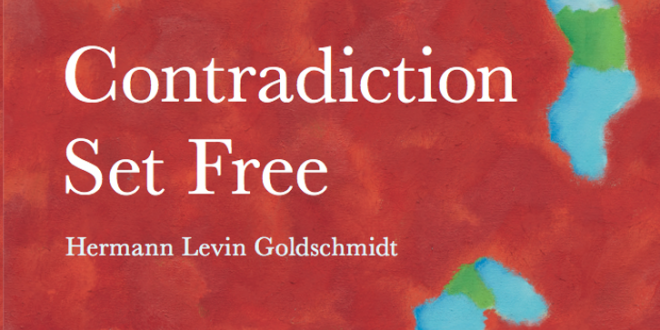 First published in 1976, John Koster’s superb English translation of Hermann Levin Goldschmidt’s Contradiction Set Free, (Freiheit für den Widerspruch) has just been released by Bloomsbury with an introduction by Willi Goetschel. The book reflects the push to explore new forms of critical thinking that gained momentum in the decade between Theodor Adorno’s Negative Dialectics of 1966 and Paul Feyerabend’s Against Method in 1975.

Contradiction Set Free articulates Goldschmidt’s reclamation of an epistemologically critical position that acknowledges the deep underlying link between the modes of production of knowledge and the social and political life they produce. In signalling a breakout from the academic rut and its repressive hold, Goldschmidt pointed beyond the ossified methods of a philosophical discourse whose oppressive consequences could no longer be ignored. Contradiction Set Free makes available for the first time in English a pivotal work by one of the great critical thinkers of the 20th century.

Hermann Levin Goldschmidt (1914-1998) was an independent philosopher and champion of dialogical thinking. A native of Berlin, he fled to Zurich in 1938 and continued to live and work in Switzerland until his death in 1998.

“What if, instead of trying compulsively to avoid contradiction, we embrace it as an opportunity? This work discusses in an entirely original and highly lucid way some of the consequences this change of attitude might have for our views about such phenomena as meaning, freedom, guilt, politics and technology.” –  Raymond Geuss, Professor of Philosophy Emeritus, University of Cambridge, UK

“Contradiction Set Free is one of Herman Levin Goldschmidt’s most important books and it has lost none of its power since its publication forty years ago.This meticulous translation, together with Willi Goetschel’s extremely helpful introduction, should go a long way to seeing that he is finally given his rightful due in the English-speaking world.” –  Robert Bernasconi, Edwin Erle Sparks Professor of Philosophy and African American Studies, Penn State University, USA.