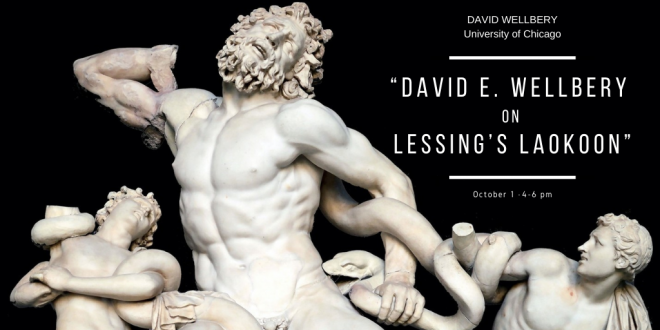 The reading group Ekphrasis in conjunction with the Department of Germanic Languages & Literatures is happy to announce the following guest lecture by Dr. David E. Wellbery (University of Chicago). David E. Wellbery will join the reading group on Thursday October 1st, 2020 from 4-6pm to discuss passages from Lessing’s Laokoon oder über die Grenzen der Mahlerey und Poesie (1766) with reference to the overarching theme of ekphrasis.

Lessing’s Laokoon has outlived most of its contemporaries in 18th-century criticism and the reason for its abiding influence may well be that it gets to the core conceptual issues with incomparable clarity. Lessing’s Laokoon appears to be foremost an analysis of ekphrastic passages from Vergil in order to critique Horaz’ ut pictura poesis as well as Winckelmann’s idealization of Ancient sculptures and art. What strikes us nowadays about Laokoon is the self-referentiality envisioned in the use of ekphrasis as a critique of an approach intermingling between description/depiction in terms of spatiality and the temporality of narration. As if the critique as genre is to stand apart from aesthetic categories and, thus, would allow for a naïve use of ekphrasis; quite ironic to some extent. In addition, Lessing’s writing as critique and criticism paves the way for the intricate relationship between ekphrasis and the reception of Ancient Greek and Roman art displayed in the texts of writers and figures such as Keats, Baudelaire, Nietzsche, and Aby Warburg.

At this meeting of the reading group we will focus on the following sections of the text and the topics indicated:

a) Criticism between Philosophy and Aesthetic Experience: Lessing’s Preface to Laokoon
b) The Debate with Winckelmann and the Distinction between Poetic and Pictorial Meaning: Chapters I-IV
c) Narrative vs. Description and the Question of Coherence: Chapters XVI-XVII
d) The Poetic Motivation of Description: Chapters XVIII-XXII.
e) Outlook: The Afterlife of Lessing’s Laokoonin 20th-century Criticism

David E. Wellbery, Chair of the Department of Germanic Studies, joined the faculty of the University of Chicago in 2001 as the LeRoy T. and Margaret Deffenbaugh Carlson University Professor and holds appointments in the Department of Germanic Studies and the Committee on Social Thought. Professor Wellbery is the founding Director of the Center for Interdisciplinary Research on German Literature and Culture. Among his numerous publications two of his books are considered classics in the field of German literary history: Lessing’s Laocoön. Semiotics and Aesthetics in the Age of Reason (Cambridge University Press, 1984) and The Specular Moment: Goethe’s Early Lyric and the Beginnings of Romanticism (Stanford University Press, 1996).

The guest lecture will take place on Zoom. If you would like to participate, please send an email to andre.flicker@mail.utoronto.ca

For any accommodation needs, please email german@chass.utoronto.ca, and we will do our best to assist you.