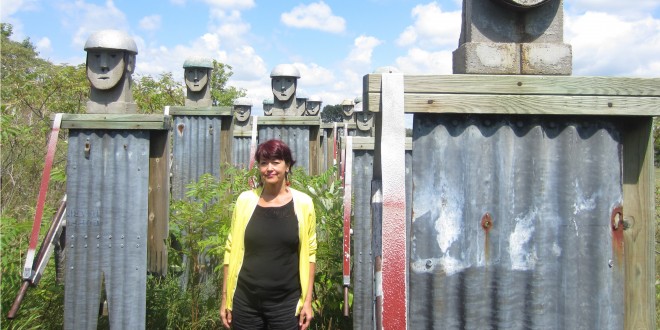 Teresa Sudenis is a PhD Student in our Department. She studied German Philology in Wrocław (Poland) and wrote her Master’s thesis on Günter Grass’ Der Butt.

Her family is of German origin and lives in Silesia, a province now located in the part of South Poland which belonged to East German territories until the end of the Second World War. Her upbringing in both of these extremely different and opposing cultures, i.e. the German family and the Polish environment, prompted her to question her own identity and national affiliation, given that her family background influences her research interests to a great extent.

The notion of identity is the main aspect that holds all parts of her dissertation project together. A second significant aspect is memory, in particular passing down memories from grandparents to grandchildren. She is especially interested in the memory transfer from the generation of Germans who witnessed World War II to their grandchildren, the representatives of the third postwar-generation of Germans. Her project examines the impact of war, flight and expulsion, and the loss of homeland on the transfer of memories in families. Examining three contemporary German novels (Himmelskörper by Tanja Dückers, Schlesisches Wetter by Olaf Müller, and Amber by Sabrina Janesch), Teresa Sudenis investigates the way the trauma experienced by the grandparents and parents is still present in the lives of the families depicted in these novels, and the way in which this trauma generates identity problems and sends grandchildren on search for self-identity. The protagonists of these novels visit their grandparents’ lost homeland at some point, travelling from Germany to what is now Poland. She examines their motives and takes a close look at the process of identity formation put into effect by the journey and the visit to long-lost places of family memory.

Her research is especially applicable in today’s world, where thousands of people are displaced and expulsed from their lands and homes because of wars, economic needs or natural disasters, making the investigation of such themes in literature of particular concern to the humanities.

Last year she also attended the Annual Conference of the American Comparative Literature Association (ACLA) in New York, and the Languages, Literatures and Cultures Conference (KLFC) at the University of Kentucky, Lexington. At both conferences she presented papers engaging in the topic of the impact of a lost Heimat on the postwar-generation of Germans, and the motive for travelling to places of family memory