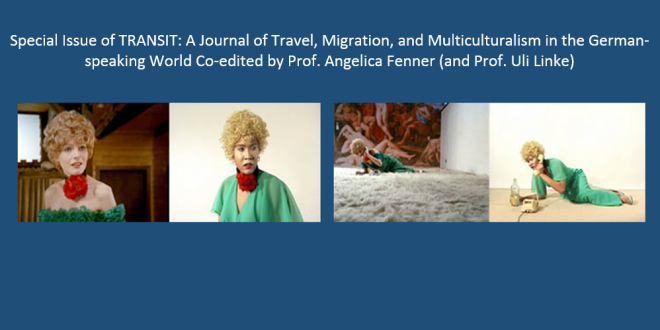 Contemporary Remediations of Race and Ethnicity in German Visual Cultures

Special Issue of TRANSIT: A Journal of Travel, Migration, and Multiculturalism in the German-speaking World Co-edited by Prof. Angelica Fenner (and Prof. Uli Linke)

This Special Issue emerged out of the 6th Toronto German Studies Symposium, which took place in April 2013 and was co-organized by Professors Angelica Fenner (German and Cinema Studies, University of Toronto) and Uli Linke (Anthropology, Rochester Institute of Technology), with generous funding provided by the DAAD and by the Department of Germanic Languages & Literatures, the Cinema Studies Institute, the Joint Initiative in German and European Studies, the Munk School of Global Affairs, and the Faculty of Arts & Science.

TRANSIT: A Journal of Travel, Migration, and Multiculturalism in the German-speaking World

The New Diversity and the New Public: Impressions of dOCUMENTA (13)
Barbara Wolbert

On the Train
By Emine Sevgi Özdamar
Translated by Leslie A. Adelson

The Counter-Cinema of the Berlin School, by Marco Abel
Christian Petzold, by Jaimey Fisher<http://transit.berkeley.edu/2014/tovey-2/>
Reviewed by Cara Tovey