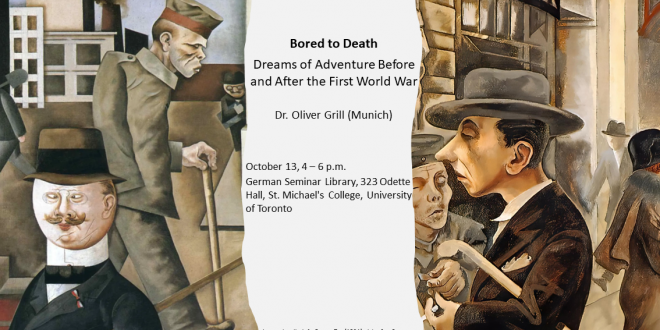 Bored to Death. Dreams of Adventure Before and After the First World War

The “man of 1914 was literally bored to death! That is why the war came upon him with the intoxication of adventure, with the glory of distant undiscovered shores.” Robert Musil made this observation when the end of the First World War was already in sight. Trench warfare had taught Musil and his contemporaries the painful lesson that the dreams of adventure that had accompanied the outbreak of war had been deceptive. However, their intensity could not be easily forgotten. This ambivalence invites efforts to analyze not only the “boring” cultural situation before the war more generally, but also the dreams of adventure that emerged from it. As the lecture will show on the basis of Musil’s The Man Without Qualities and Thomas Mann’s The Magic Mountain, the most important medium of analysis is the novel, which has been the natural habitat of adventure since at least the Middle Ages.

OLIVER GRILL is Assistant Professor at the Institute of German Philology of the Ludwig Maximilians-University of Munich. His research interests include Goethe, the history of the novel, the cultural history of weather and meteorology, German realism, and adventure narratives in modernity. He is the co-editor of Abenteuer in der Moderne (Fink 2020) and the author of Die Wetterseiten der Literatur (Fink 2019).

This talk is part of Dr. Grill’s visiting professorship at the University of Toronto. The stay is funded by the German Research Foundation and hosted by Prof. John Zilcosky.

German in the City School Partnership 2022