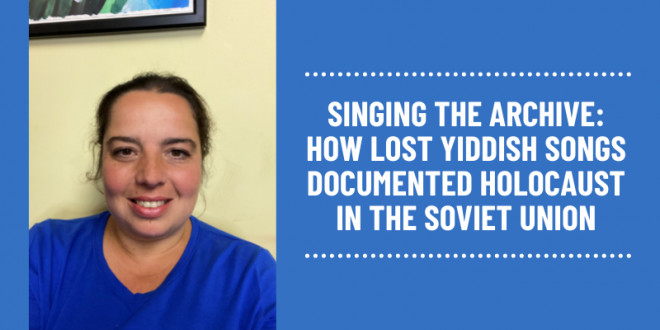 Congratulations to Prof. Anna Shternshis who won a SSHRC Insight Grant for her project “Singing the Archive: How Lost Yiddish Songs Documented Holocaust in the Soviet Union”

The project’s goal is to document the history of the Holocaust in the Soviet Union through Yiddish songs created during World War II. Based on archival documents from the Ukrainian National Library, the project focuses on history of the most vulnerable victims of the war — women, children, and the elderly — who created the songs, sometimes only days before they were murdered. These musical pieces represent some of the earliest extant Jewish eyewitness accounts of World War II in the Soviet Union. This  project will also include a new multi-media installation of video-recordings, audio files, photographs of archival documents, and selected stories about the songs, their authors, and the scholars who risked their lives in the 1940s to collect the materials.